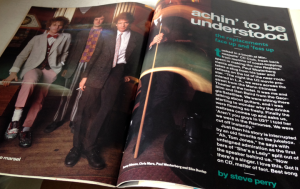 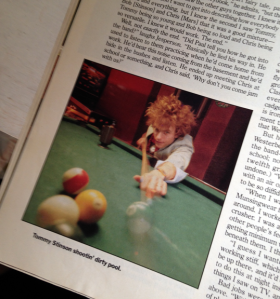 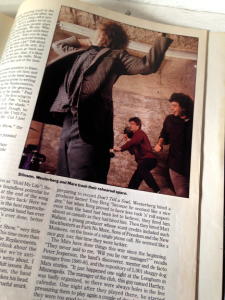 What a great cover. There’s the band, in all their ragged glory.

I bought this issue of Musician magazine in 1989, as soon as it came out. Years later, I learned that Jon Bon Jovi wrote a letter to Musician, asking, “How can the Replacements be the best band of the 80s when I’ve never even heard of them?”

Jon — you answered your own question, ya knob! Go fuck yourself.

But seriously now, this cover story remains significant as it tells the band’s coming of age story—from their early days in the Minneapolis punk/hardcore “scene” to “Professional whats, I don‘t know,” as Paul quips during the interview. I’ve read this story about 50 times, and with each read I learn something new. And I still love staring at that photo of Tommy “shootin’ dirty pool.”

It also marks a turning point for the band. When this issue came out, Don’t Tell a Soul just hit the racks. The Replacements were seemingly on the verge, and this article served to give them a push. Too bad it didn’t work. Or is it?

Coming soon, scans of the full article, so you can actually read the damn thing.